SprutCAM has the capability of programming of multitask turning machines with sub spindle (MTM). It enables to create NC programs for simultaneous machining of several parts by multiple tools. 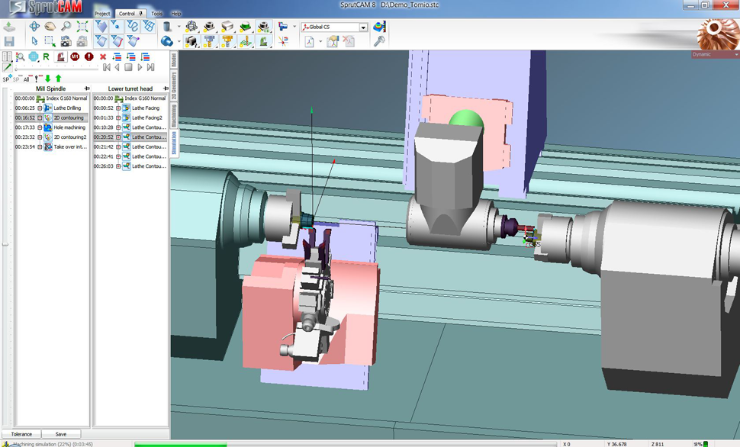 The image above shows a typical type of multi-task machine. It comprises a turning center with a turret and a 6-axis milling machine. In addition, there is a programmable sub-spindle, providing second op. machining of the part. The standard technological process of machining on such a machine assumes:

Control of each section of the multi-task machine is usually maintained by a separate (channel) controller, each channel runs its own program. Consequently, the programming of such a machine involves the task of creating two or more programs; one for each control channel, consequently, the task of synchronization of these channels / programs arises. To ensure correct coordination for the machining of multiple channels, it is necessary to use the controls “waiting” capability. In our case, for example, the milling turret is unable to start machining the work piece in the left chuck whilst this work piece is being turned using the lower turret.

To ensure a really efficient use of a multi-task machine, it is necessary to minimize the waiting time. This task ideally requires the equal distribution of the load among executive devices. In our example, this means that the amount of machining performed by the turret and the spindle should be approximately equal. Moreover, processing time on the left and the right chucks should also be balanced.

At a time when there are several work pieces and several executive devices simultaneously working in one area, realistic simulation of the whole process including the ability for collision checking of all the objects in the area becomes really important. Only by having such simulation capabilities can you be really confident of the accuracy of the developed machining process which will essentially cut the likelihood of any possibl collisions caused as a result of programming errors.

So, the SprutCAM system possesses all of the abilities that are required for the programming of multitask machines. Among these are: